Everything had been going well with my BPX reel quick drag conversions, as I discuss here.

Last night I was having another play with the reels - as you do - and I noticed that one of them had developed an alarming grating noise on the retrieve, and the spool (and pinion shaft it mounts on) was completely loose.

These are not good things...

I figured I knew what the problem was, though - and how to fix it. I suspected that during my many off-and-ons of the spool (the drag knob is tenacious and needs some "persuasion" to remove so that the spool can come off) I'd pulled hard enough to pull the pinion shaft out of alignment with the main gear.

I've disassembled/serviced/rebuilt umpteen reels in my time - this wasn't my first rodeo - so it would be an easy-enough fix, if I was right.

Sadly, I'll never know. I could not get the cover plate off the reel in order to get into the gubbins, no matter what I did.

But instead of leaving the job until the next day, I kept at it. This was 4 am, never a good time to be messing about with fiddly little parts and stubborn reel bodies, and I eventually got to the point of frustrated impatience, ragged at the cover plate too hard, and broke it.

In the process (I'd removed several screws in the hope that one of them would be the key to shifting the cover) several shiny, hard-to-identify bits fell out of the body cavity. It's a far more complicated reel than I'd anticipated, as it turns out.

And for all I'd broken the cover plate, it still remained firmly in situ, so I couldn't even have a stab at putting the bits back.

I can say that the quality of the bits inside (now outside) the reel is impressively high - a machine-cut brass oscillating worm gear drive, for example - so I'm confident that the two remaining reels will continue to function perfectly well, but it's a disappointment nevertheless.

So, new plan. I'll pair the two remaining reels with my NGT Travel Carp rods (surprisingly, they're lighter than the Shimano 8000 Baitrunners I had earmarked for the job), and go back to what set me off in this direction in the first place: today I've ordered three Okuma Custom Black CB-60s: 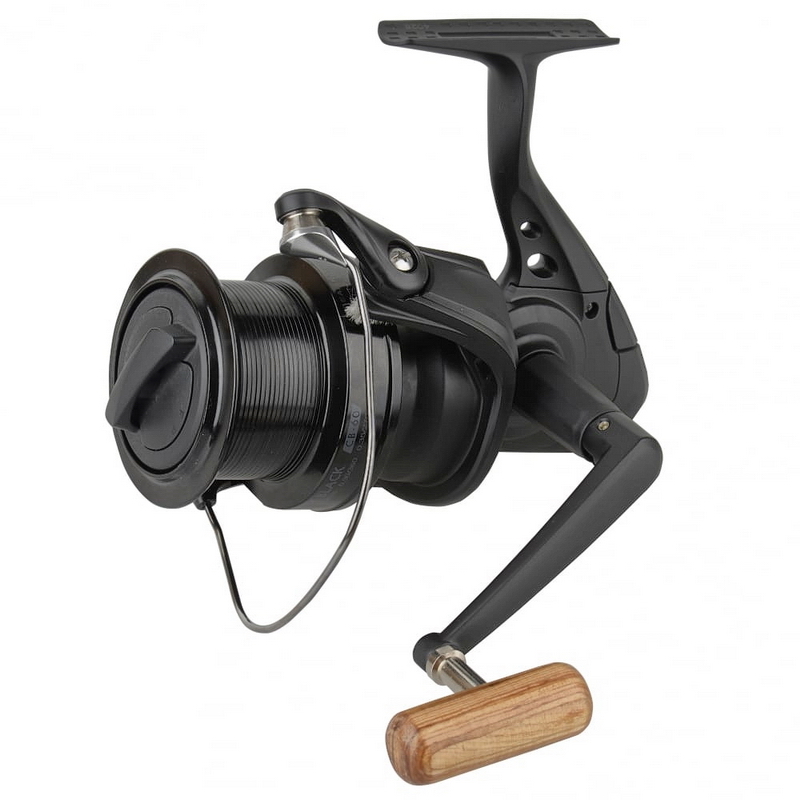 I appear to have got the last three in stock at North East Tackle Supplies, at £41 each.

Added: Errrr... Or not. Their website showed them as in stock when I ordered, but after they took my fecking money, I found out that they had none in stock - and at no point did they reach out to let me know when they'd get more. In fact it was three days before the order went from being processed to waiting for stock, and I didn't hear from them about that either.

I bliddy hate that - "we've got your money, you can go fuck yourself" - so order cancelled, I'm getting them from Amazon instead. And I won't be buying from North East Tackle Supplies again...

Significantly, the Okumas come with "Fast Progressive Drag" (Okuma's name for its quick drag solution) as standard (which I wish I'd known before I grabbed the BPXs) so at least I won't feel the need to fanny about with them any time soon.

And yes, I'll probably succumb to the temptation of another BPX - they're just great little reels, and I've got a quick dragged spool for it, all ready to go...

I every time soent my half an hour too read this
web site's content every day along with a mug of coffee.

My spouse and I absolutely love your bloig and
find a lot of your post's to be precisely what I'm looking
for. Does one offer guest writers to write content for yourself?
I wouldn't mind pblishing a post or elaborating on many
of the subjects you write regarding here.Again, awesome weblog!

Hello, the whole thing is going well here and ofcourse every one is sharing data, that's truly excellent, keep up writing.

Thanks a lot, Quite a lot of stuff!

Thanks for your personal marvelous posting!
I seriously enjoyed reading it, you could be a great author.
I will be sure to bookmark your blog and will often come back down the
road. I want to encourage yourself to continue your great work, have a nice
holiday weekend!
https://peugeotstr.ru/sports-cars-super-sports-cars-crazy-racing-on-hot-wheels-tracks-cars-race-in-the-city_8c004f23f.html
Mammie; Mammie, https://peugeotstr.ru/kak-snyat-zadniy-fonar-na-pezho-308-sw_6a0b3ef64.html

I enjoy reading through a post that will make men and women think.
Also, thank you for permitting me to comment!
https://docs.google.com/spreadsheets/d/1yi649XjNT7drdWmcPxwhswthaG_smUQan41y2-9j54w/edit
http://fahrab.de/bilder/view.php?gid=36&phid=16
Ссылка на google таблицы https://docs.google.com/spreadsheets/d/1yi649XjNT7drdWmcPxwhswthaG_smUQan41y2-9j54w/edit