For the most part I'm almost pathologically optimistic - I epitomise "glass half full". I like having this mindset, and it has served me well over the years.

If I'm allowed to dwell on something for a long time, I always find myself - eventually - looking for, trying to second-guess, problems: my "But What If This Happens..?" alter ego always shows up.

(This, I've realised, is a key reason for my preference to make decisions on the spur of the moment, and get them done quickly.)

And so it is with me at the moment.

I'm really looking forward to the day when I finally get four wheels under me: money's not a problem, neither is insurance - it's all (on the face of it) good.

But because it's not likely to happen for some time to come, I've been able to dwell. And - sure enough - But What If..? guy is starting to get my attention.

To explain. I live on quite a busy street, close to a tyre and exhaust fitter/petrol station/MOT garage - so there's always a lot of cars about - and I don't have a garage.

So I'd be parking on the street.

Nothing inherently problematic about that - cars are parked in front of their owners' houses right along the street -  except that due to the numbers of cars invariably parked up around the garage waiting for new tyres, exhausts, MOTs and whatnot: and due to my next door neighbours owning two cars (and apparently being determined not to park them near the corner of the side street that joins our street), this is what the front of my house is always like: 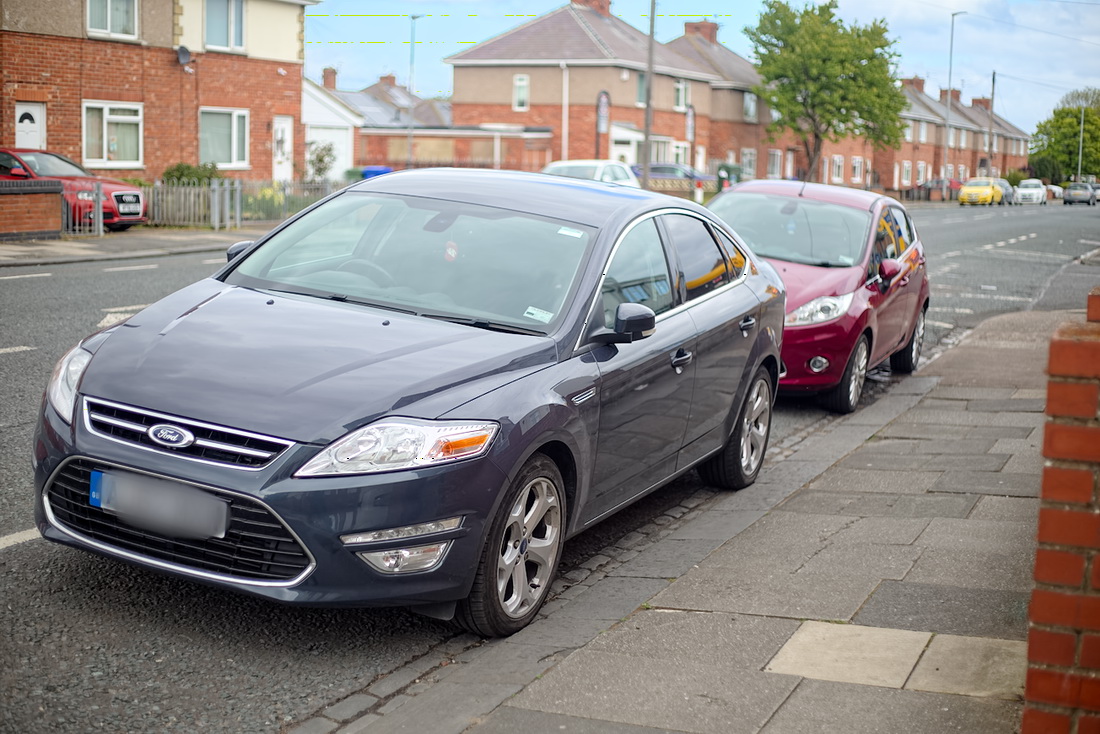 The smaller car - the Fiesta - is in front of their house, the Mondeo is always right in front of mine (the low wall on the right is actually the boundary wall of my property - I took this picture from the middle of the shared drive between my house and the next one along).

And although this picture doesn't really suggest it, there's enough room between the Fiesta and the corner for another Fiesta...

So I've got it into my head that we're going to have a problem, Obviously I want to park more-or-less in front of my own house, but I have to get round this first.

Does past experience suggest I'll have a problem with the neighbours?

Well, not really: we're not what you'd call friends, but relations have been cordial enough over the years - and I've done them favours in the past which I've no objective reason to believe they won't be happy to repay: if there's any reasonableness at all about them, they'll acknowledge that because they're on a corner, they have kerbside parking the entire length of our long gardens, to choose from.

With that said, I reckon that three cars will fit on the front - maybe overlapping my drive a little (I'm OK with that, as it'll stop the muppet next door from parking on it - maybe he'll finally grasp what access only, as documented in the property deeds, means), assuming I don't end up with something enormous like a Soda Superb - and that's certainly not my intention.

Nevertheless, I'm getting more and more wound up by the idea that I might get a car and then have my life ruined (if that's not too melodramatic) by not being able to park within sight of my own front window...

I know that the law doesn't help here, incidentally - no right to park on my doorstep - but other people all around me seem manage. And as I say, I've got no past experience of neighbourly bullshit that would explain my current anxieties.

In fact, I suspect - when I'm being rational about the situation - that the Mondeo is simply there because why not? They know I don't have a car, so what's the harm?

Which is fair enough, really.

But I can't shake the apprehension that car ownership is going to be a mare for me.